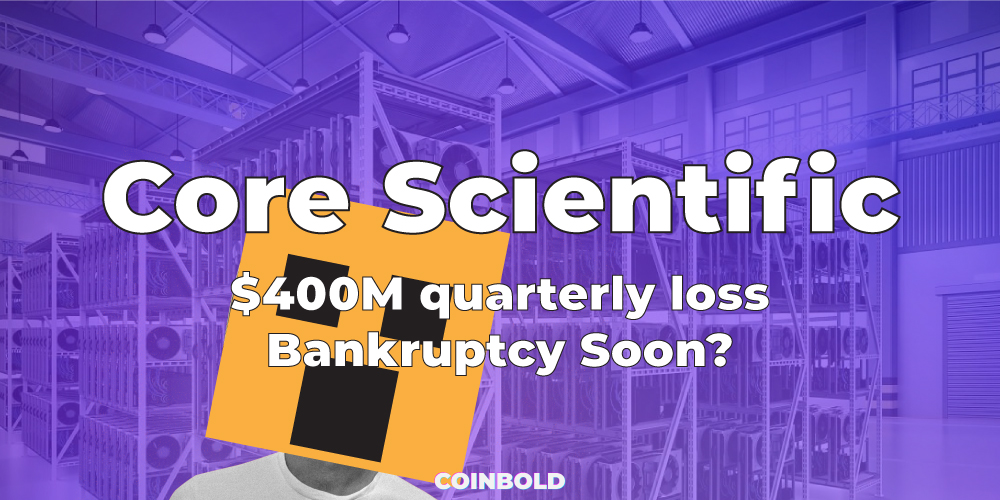 After reporting a loss of well over $400 million in the third quarter, Bitcoin (BTC) mining company Core Scientific may be the next company in line to file for bankruptcy protection.

The company, which is known as the largest publicly listed Bitcoin miner in the US, has now lost a whopping $1.7bn for the year after a new SEC filing revealed a third quarter loss of $434m.

According to the most recent filing, the firm said that “management has been actively taking initiatives to lower operational costs, remove and postpone development expenses, reduce and delay capital expenditures, and improve hosting revenues.”

In addition, it said that some debt payments that were due in October of this year have not been paid, and as a consequence, it anticipates that its creditors will take legal action against it.

In October, Core Scientific came clean and revealed that the company was soon to be out of money. At the same time, the company said that bankruptcy is a distinct possibility. In order to aid in analyzing strategic options, the business has already hired the law firm of Weil, Gotshal & Manges LLP as legal consultants and PJT Partners LP as finance advisers. Both of these firms will provide guidance.

Core Scientific has $32 million in cash on hand as well as 62 bitcoins as recently as one month ago. This was a considerable decrease from the company’s holdings before the second quarter, which were 8,000 BTC; nevertheless, the majority of the company’s bitcoin assets were sold off during this period.

The most recent disclosure that Core Scientific has made with the SEC indicates that the company thinks its present financial resources would be expended “by the end of 2022 or sooner.” In addition, it was said that there is now “serious question” as to whether or not the firm would be able to continue operations moving ahead.

Given the magnitude of the Nasdaq-listed firm, Core Scientific’s impending bankruptcy is likely to have far-reaching repercussions for the bitcoin and cryptocurrency mining sector.

After the announcement of the quarterly results report on Tuesday, Core Scientific’s share price dropped by 20% for the trading day. The stock price has dropped by about 99% since the beginning of the year.